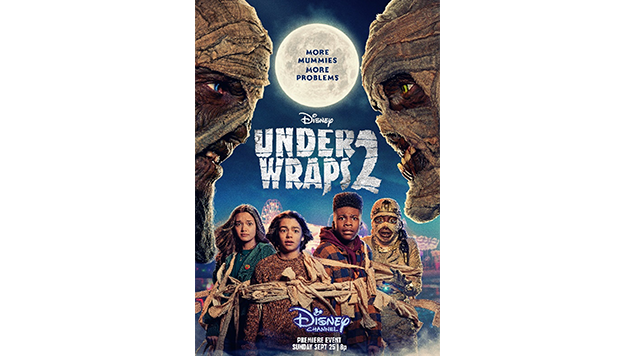 “Under Wraps 2” picks up as Marshall (Malachi Barton), Gilbert (Christian J. Simon) and Amy (Sophia Hammons) are getting ready to attend Amy’s father’s Spooktacular Halloween-themed wedding to his fiancé Carl. However, plans soon go awry when the three friends discover their mummy pal Harold (Phil Wright) and his beloved Rose (Rryla McIntosh) may be in danger. Sobek (T.J. Storm), an evil mummy with a 1000-year-old grudge against his best friend-turned-bitter-rival Harold, is unexpectedly awakened and out for revenge. With help from his hypnotized lacky Larry (Jordan Conley), Sobek kidnaps Rose. Gilbert, Marshall, Buzzy (Melanie Brook) and Harold must use their skills once again to save her and get back in time to attend the wedding.

“We are thrilled to kick off the Halloween season by taking the fans on another spooky adventure with even more mummies, more scares and more fun,” said Lauren Kisilevsky, SVP of Original Movies, Disney Branded Television.

Produced by MarVista Entertainment, Alex Zamm returns as director of “Under Wraps 2” (R.L. Stine’s “The Haunting Hour: Don’t Think About It,” “Beverly Hills Chihuahua 2”), with Todd Y. Murata (“Sightless,” “Best. Worst. Weekend. Ever.”) and Fernando Szew (“Back of the Net,” “16 Wishes”) also returning as executive producers for MarVista Entertainment. Josh A. Cagan (“Spin,” “Kim Possible”) is writer for the sequel, based on the original movie written by Don Rhymer.

About Disney Branded Television
Disney Branded Television encompasses the creative storytellers and production and content marketing teams responsible for Disney-branded television series, movies and other programming spanning live-action, animated and unscripted formats. The group fuels the Disney+ streaming platform and Disney Channel, Disney XD and Disney Junior linear networks with content geared toward kids, tweens, teens and families, with stories that are imaginative, aspirational and reflective of their world and experiences. Recent projects include “High School Musical: The Musical: The Series,” “Monsters at Work,” “The Mysterious Benedict Society” and “Marvel’s Spidey and his Amazing Friends.” Disney Branded Television has created some of the most iconic and award-winning properties and franchises, including Peabody Award winners “Doc McStuffins” and “The Owl House”; Emmy Award winners “Big City Greens” and “Elena of Avalor”; the beloved “Mickey Mouse” cartoon shorts plus the Disney Channel Original Movie (DCOM) franchise, comprised of more than 100 titles.

*COPYRIGHT ©2022 Disney Enterprises, Inc. All photography is copyrighted material and is for editorial use only. Images are not to be archived, altered, duplicated, resold, retransmitted or used for any other purposes without written permission of Disney+. Images are distributed to the press in order to publicize current programming. Any other usage must be licensed. Photos posted for Web use must be at the low resolution of 72dpi, no larger than 2×3 in size.