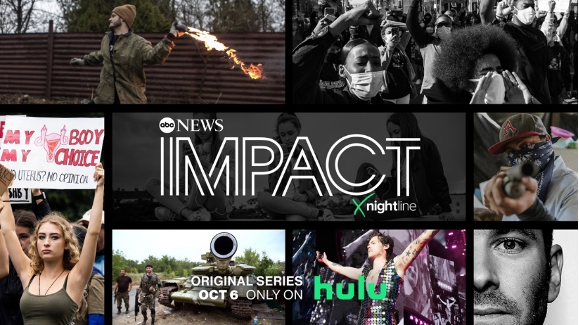 ABC News Studios announced today “Impact x Nightline,” its first weekly streaming news magazine. Each week, ABC News’ correspondents will leave the anchor desk and studios behind, taking viewers on a journey straight to the source of the stories everyone is talking about, plus the ones no one has even heard of yet. The program’s timely reporting will dive deep into the issues driving the conversations across America and spotlight real people affected by current events featuring hard-hitting investigative reports and profiles of newsmakers from around the globe.

“Impact x Nightline” will stream exclusively on Hulu beginning Thursday, Oct. 6, and is the second weekly offering from ABC News for streaming viewers, following the launch of “Power Trip” on Sunday.

“The title of the show is intentional. We’re hoping that it not only explores the topics that matter to our viewers but does so in a meaningful way that can actually have an impact,” said Eman Varoqua, executive producer of “Nightline” and “Impact x Nightline.”

The first episode centers on one of the most polarizing topics in America today: abortion. Building off “Nightline”’s Peabody-winning and Emmy®-nominated body of work, Emmy Award-winning correspondent Rachel Scott and the team go beyond the culture wars, fanning out across the country telling the stories of women, families and providers while exploring the complexity of the divisive issue. The documentary-style report includes personal abortion stories and activists on both sides, including TikTok creators — one pro-abortion rights and one anti-abortion rights — who are gaining national attention, and examines abortion in America in a post-Roe v. Wade world.

Upcoming episodes will tackle a wide range of topics, including examining what really happens to a town after a tragic school shooting, the business of American nostalgia, and even stories of crime, murder, mystery and more.

“‘Impact x Nightline’ will break from the norm, showcasing immersive, story-driven reporting that you won’t see anywhere. If you are seeing it on ‘Impact,’ it probably means you haven’t heard about this side of the story,” said Justin Dial, vice president of streaming news. “The program will take the viewers to the frontlines of the story, reporting from anywhere in the world where the story happens.