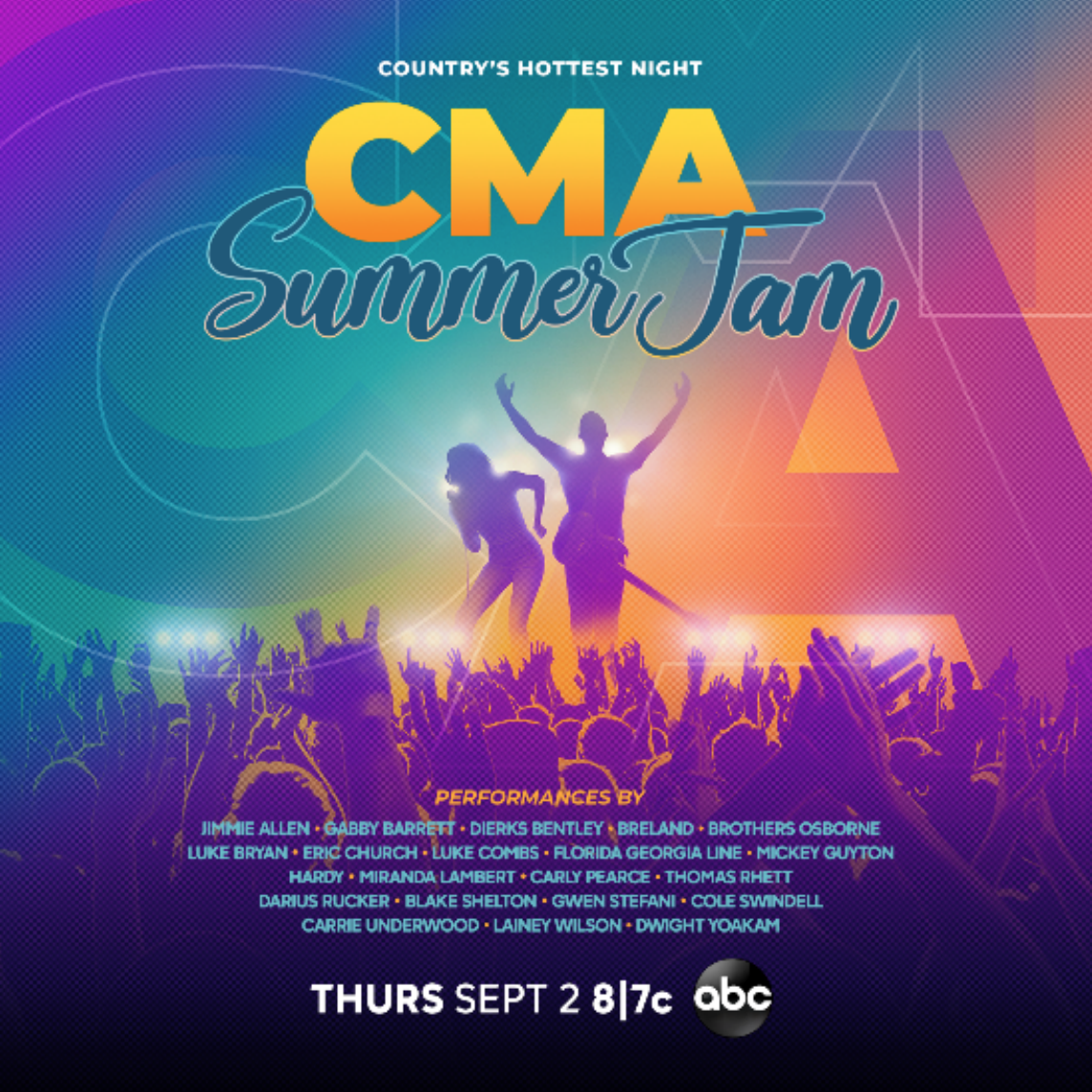 Fresh off two magical nights of Country Music from the open-air Ascend Amphitheater in downtown Nashville, the Country Music Association and ABC have announced that “CMA Summer Jam” will air THURSDAY, SEPT. 2 (8:00-11:00 p.m. EDT), on ABC. Filmed amidst the skyline of downtown, the three-hour, artist-curated primetime special will feature individual performances and collaborations from more than 20 of the biggest stars in Country Music.

Additional performances featured in the primetime special will include Bentley with BRELAND and HARDY live from Bentley’s Whiskey Row nightclub on Broadway, Eric Church from the center of the city’s John Seigenthaler Pedestrian Bridge overlooking the Cumberland River, and Darius Rucker taking the outdoor stage at Nashville’s brand new Fifth & Broadway complex downtown.

“I am still grinning ear to ear from these last two nights of incredible live Country Music,” says Sarah Trahern, CMA chief executive officer. “Seeing artists finally return to the stage and the reaction from fans was absolutely electric. Viewers are in for such a treat from familiar superstars and fresh new faces when ‘CMA Summer Jam’ airs on Sept. 2 on ABC.”

To ensure the safety of all “CMA Summer Jam” working personnel and performing talent, CMA implemented extensive testing requirements, daily health checks and mask mandates in accordance with the guidelines of DGA, IATSE, SAG/AFTRA, Teamsters and Basic Craft unions, regardless of vaccination status. Additionally, in line with current CDC guidance, CMA provided on-site signage and verbal reminders strongly encouraging ticketed guests who were not fully vaccinated to continue wearing face coverings unless they were actively eating, drinking or were otherwise exempt from having to wear a face covering.

“CMA Summer Jam” is a production of the Country Music Association. Robert Deaton is the executive producer and writer, and Alan Carter is the director.

About the Country Music Association
Founded in 1958, the Country Music Association is the first trade organization formed to promote a type of music. In 1961, CMA created the Country Music Hall of Fame to recognize artists and industry professionals with Country Music’s highest honor. Music industry professionals and companies from around the globe are members of CMA. The organization’s objectives are to serve as an educational and professional resource for the industry and advance the growth of Country Music around the world. This is accomplished through CMA’s core initiatives: the CMA Awards, which annually recognize outstanding achievement in the industry; CMA Fest, which benefits the CMA Foundation and music education and is taped for a network television special, “CMA Fest” and “CMA Country Christmas.” All of CMA’s television properties air on ABC.