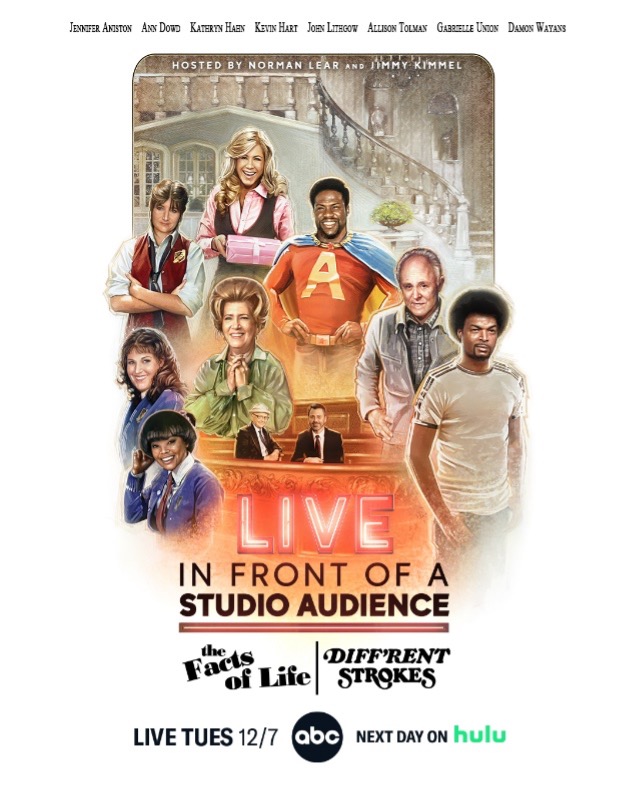 “Live in Front of a Studio Audience: ‘The Facts of Life’ and ‘Diff’rent Strokes’” rounds out its star-studded cast ahead of the live special airing on ABC, TUESDAY, DEC. 7 (8:00-9:30 p.m. EST). In this one-night-only event, an all-star lineup of talent will tackle the roles first portrayed in the iconic television sitcom “The Facts of Life,” including Jennifer Aniston playing the role of Blair, Gabrielle Union taking on the role of Tootie, Allison Tolman who will play Natalie and Kathryn Hahn recreating the role of Jo. Previously announced “Diff’rent Strokes” cast member Ann Dowd is also set to appear as Mrs. Garrett in this recreation of “The Facts of Life.” The Sony Pictures Television special can also be viewed the next day on demand and on Hulu.

About Sony Pictures Television
Sony Pictures Television (SPT) is one of the television industry’s leading content providers, producing, distributing and carrying programming worldwide in every genre and for every platform. In addition to managing one of the industry’s largest libraries of award-winning feature films, television shows and formats, SPT is home to a thriving global content business, operating a robust portfolio of wholly-owned and joint-venture production companies across the U.S., Europe, Latin America, and Asia Pacific, as well as linear and digital channels around the world. SPT is a Sony Pictures Entertainment Company, a subsidiary of Tokyo-based Sony Group Corporation.