‘Climate Crisis: Saving Tomorrow’ Will Air Across All Programs and Platforms, Featuring an In-Depth Look at the Causes and Risks of Climate Change and Necessary Steps to Avoid Further Consequences

‘World News Tonight’ Anchor David Muir Leads Coverage Live From the 2021 UN Climate Change Conference in Glasgow, and is the First American Network Journalist to Report From Inside Madagascar With World Food Program 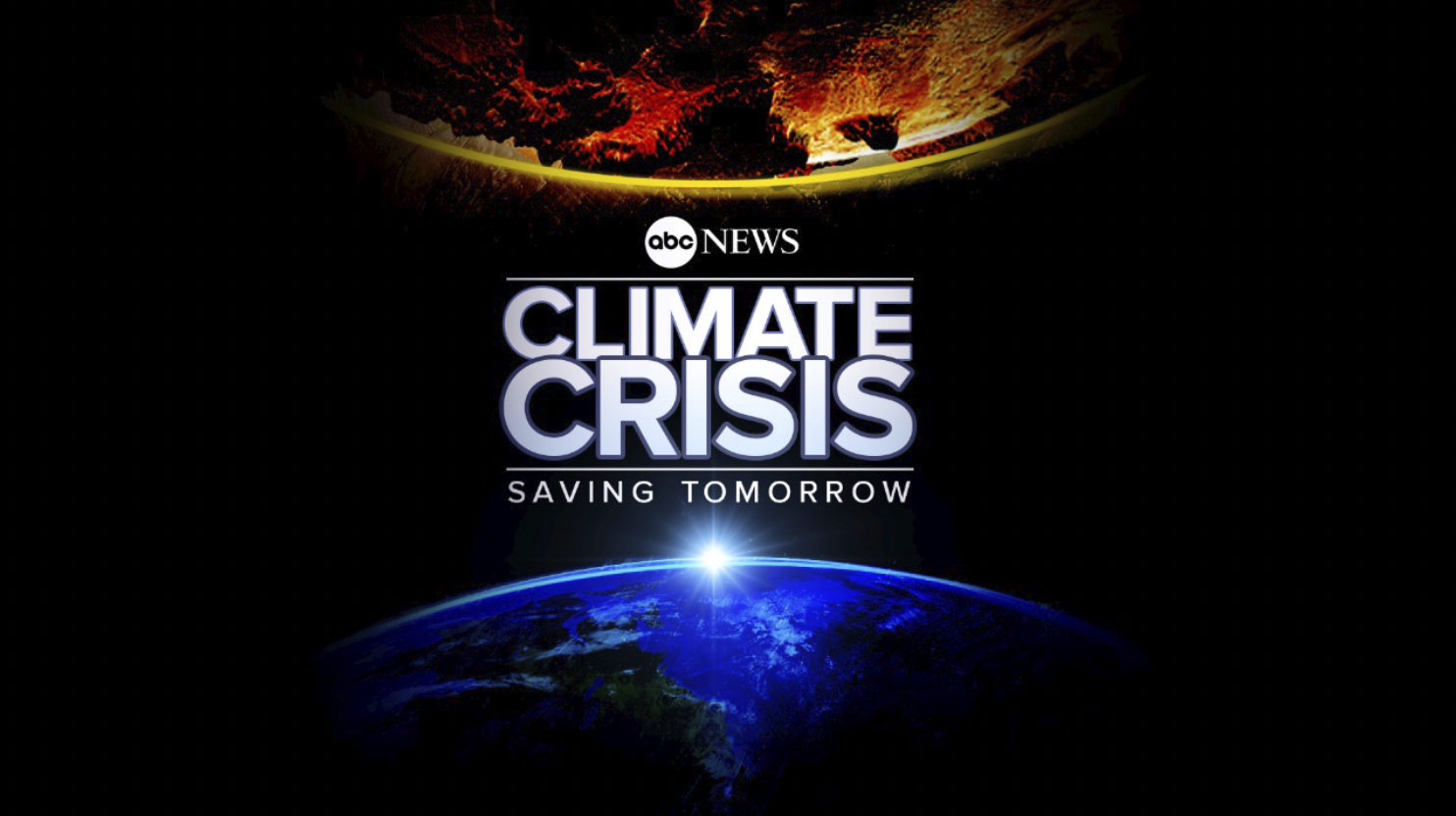 ABC News announced today a month-long climate change coverage series spanning seven continents on the eve of world leaders gathering in Glasgow and joining forces to mitigate further damage from the climate crisis facing the world. ABC News will commit unprecedented resources, deploying anchors and correspondents worldwide from Louisiana and the Amazon to India and Antarctica, to cover the circumstances that have put millions of people at risk, as they struggle with rising sea levels, famine, weather threats and more, in search of answers to prevent the damaging consequences of inaction. “World News Tonight” anchor David Muir, the first American network journalist to get into Madagascar with the World Food Program, will lead coverage with his reporting from inside a country facing famine driven by climate change, for the network’s initiative, “Climate Crisis: Saving Tomorrow,” which will air across all ABC News programs and platforms beginning Nov. 1. Muir will also anchor from Glasgow, Scotland, the site of the 2021 United Nations Climate Change Conference (COP26), with on-the-ground reporting from chief White House correspondent Cecilia Vega and foreign correspondent Maggie Rulli beginning Oct. 31.

“ABC News is committed to in-depth reporting on the climate change crisis and its effect on the people and communities around us,” said Kim Godwin, president of ABC News. “Our global coverage across each and every continent, reporting on the stark reality of the earth’s dire condition and seeking the answers on how to create change now, reflects our dedication to shedding light on one of the most pressing issues of our time.”

ABC News’ robust team of anchors and correspondents will have reports and coverage from every region of the United States, and around the world, including the following:

·       Muir will anchor “World News Tonight with David Muir” and special reports from COP26 in Glasgow; Muir will have an exclusive report from inside Madagascar, where more than one million people are facing acute hunger, a country on the verge of first famine caused entirely by climate change.

·       Chief meteorologist Ginger Zee will report from the planet’s largest carbon capture plant in Iceland, the Maldives on the threat of rising sea levels, atop a wind turbine in Pennsylvania, and the United States’ largest off-shore wind farm, looking ahead to the game-changing renewal energy future right off the nation’s coast.

·       “Good Morning America” sends “GMA3” and “20/20” co-anchor Amy Robach on a one-week expedition to Antarctica, providing a firsthand look at global warming and what it foretells for our future.

·       “Nightline” co-anchor and chief national correspondent Byron Pitts reports on the threat climate change poses to the endangered Gullah Geechee community in South Carolina. Coastal erosion, rising waters and man-made problems like development and highway expansion pose an existential threat to one of the oldest and most culturally rich communities in the U.S.

·       “Nightline” co-anchor Juju Chang documents why some migrants come to the U.S. southern border seeking refuge while migrant arrests there are at a record-high this fiscal year.  “Nightline” travels to Guatemala, where climate change has created a “dry corridor” in which communities are starving and children are facing the highest rates of stunted growth.

·       “ABC News Live Prime” anchor and “World News Tonight” weekend anchor Linsey Davis will have a report on Alaska’s Tongass rainforest and the battle between indigenous communities to preserve their lands or make money off of it.

·       ABC News chief global affairs correspondent and co-anchor of “This Week” Martha Raddatz will report on the beach erosion in Hawaii.

·       Foreign correspondent James Longman will be live from India, a country that is third behind only China and the United States in rankings of carbon emitters. Longman will also report from Greenland, where glaciers are melting at an alarming rate.

·       A thousand miles from any ocean, correspondent Alex Perez reports from Chicago as the city faces its own rising water crisis.

·       Senior meteorologist Rob Marciano reports from Louisiana as the Houma tribe, facing displacement due to rising waters and strengthening hurricanes, encounter endless challenges in their search for a new home.

·       Correspondent Kayna Whitworth details how lakes and reservoirs are drying up and contributing to massive wildfires in California – the epicenter of the record-breaking drought.

·       Rulli will report on seaweed farming in the Faroe Islands and the tidal turbine in Scotland.

·       Correspondent Britt Clennett reports from Australia, where wildfires rage and the Great Barrier Reef is under threat.

·       Reporter Patrick Revell reports on the melting permafrost in Russia.

ABC News will also expand its existing climate coverage with a new, specialized climate unit devoted to the topic of climate change and how it is affecting the world. Zee will serve as managing editor of the unit, which will include reporting contributions from new coordinating producer Tracy Wholf, who will be joining ABC News on Nov. 2, and producer Stephanie Ebbs. Additionally, ABC News has joined Covering Climate Now (CCNow), a global media collaboration of more than 400 news organizations. Organized by journalists, for journalists, CCNow provides numerous resources and coverage opportunities to strengthen newsrooms’ reporting on climate.

ABC News Digital will launch the limited digital video series “Green New Future,” a four-part series on the young innovators taking action on the biggest environmental challenges facing the world today, capturing the hopeful spirit of the change-makers as they live in a world of shifting economies, communities and livelihoods. Releasing weekly, the series features interviews with issue-focused experts, touching on the topics of regenerative farming, recycling robots, wildfires and environmental racism.

ABC News Digital will also feature a live blog of coverage from the first day of the conference and a landing page featuring photos, videos and stories covering climate change, including how school districts are combating the crisis and what challenges there are to implementing these actions. The team will feature profiles, accompanied by VOICES videos, on young people working on climate change efforts and report on a low-income community disproportionately affected by climate change. Coverage also includes reporter notebooks from correspondents in the field, a report card highlighting top countries’ pledges at the Paris Agreement and how they are faring on those pledges leading up to the conference, and a piece on what people can do to help climate change.

FiveThirtyEight will feature multiple pieces, including a story looking at Americans misperceiving each other’s environmental concerns and how that hurts marginalized groups. The team will publish charts on what Americans think about climate change and how nature isn’t healing, specifically looking at improvements the environment saw during massive global COVID-19 quarantine and the diminished gains thereafter.

ABC Audio will provide special coverage of the conference with correspondent Karen Travers reporting in Glasgow during President Biden’s trip. Travers will file regular reports for newscasts, “Perspective” and other audio platforms. Travers will also provide custom reports to affiliates and live anchored coverage and Status Reports as news warrants. ABC Audio will release a five-part climate report series examining the consequences of climate change and issues the conference is planning to address, available for ABC News Radio affiliates in 60- and 30- second versions. ABC News’ flagship daily podcast “Start Here,” hosted by Brad Mielke, will dedicate multiple segments to the effects of climate change and how Americans are addressing the problem. Through reporting by ABC News correspondents and original interviews and on-the-ground reporting by Mielke, “Start Here” will help break down the solutions world leaders will discuss. Mielke will travel to New York City’s Governor’s Island to tour the construction of living reefs that aim to protect shorelines from future superstorms. He will also interview the CEO of Orsted, which constructed seven wind turbines off America’s coast and explore President Biden’s goal of building more.

ABC NewsOne, the affiliate news service of ABC News, will be providing live reports from the site in Scotland with multiplatform reporter Reena Roy. In addition, NewsOne will be producing a series of reports on various climate issues, including food waste, recycling, and actions individuals can take to help fight climate change. NewsOne provides news content and services for more than 200 ABC affiliates and international news partners.