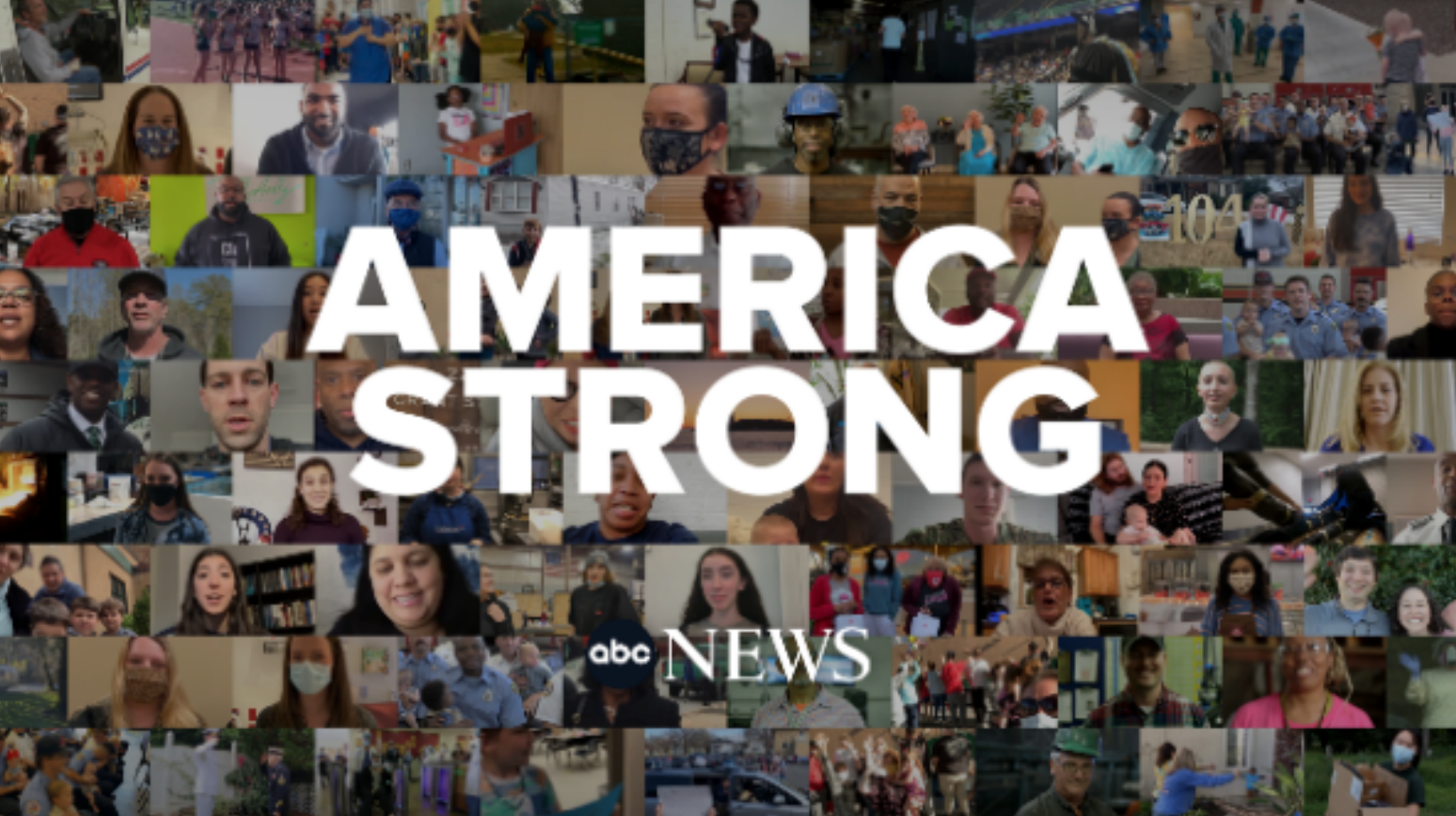 ABC News today launched “America Strong,” a multiplatform reporting series showcasing the strength and resilience of the nation. As Americans continue to confront extraordinary challenges brought on by the pandemic and extreme weather events, ABC News will profile neighbors helping community members in need and individuals finding new strength from within.

“America Strong” has been a hallmark of “World News Tonight with David Muir” for years as a way to honor the quiet heroes and celebrate the small-town triumphs in every corner of the country. The reports put a spotlight on ordinary people doing extraordinary things.

These stories of resilience will air throughout September across all ABC News programs and platforms, including “World News Tonight with David Muir,” “Good Morning America,” “GMA3: What You Need to Know,” “Nightline,” ABC News Live, “The View,” “Tamron Hall Show,” “This Week with George Stephanopoulos,” ABCNews.com, ABC NewsOne, ABC News Radio, ABC Audio’s flagship podcast “Start Here” and all ABC News social accounts. All ABC-owned television stations, along with ABC affiliates across the country, will also feature inspiring and uplifting stories in their local communities under the “America Strong” banner.

“We cannot allow the heaviness of these times to overshadow the selfless spirit that drives so many Americans,” said David Muir, anchor and managing editor of “World News Tonight with David Muir.” “It is their resilience and their quiet acts of kindness that remind us what’s truly possible. Their stories are a gift.”

“‘World News Tonight’’s iconic series, ‘America Strong,’ has reached into the homes of millions and inspired people for years,” said Kim Godwin, president of ABC News. “After a very difficult year and a half, we felt it was important to highlight more of the selfless heroism of our neighbors. We hope the expansion of this series will bring more hope to our audiences across the country.”

Below are highlights of ABC News’ coverage (subject to change):

“Good Morning America” kicked off “America Strong” this morning with “World News Tonight” anchor David Muir reporting on the positive impact the late Indianapolis high school football coach Paul Loggan had on the student-athletes and his community, and how Loggan’s family is honoring his legacy. Loggan passed away in April 2020 from COVID-19. “GMA” surprised Loggan’s family with a $10,000 donation to The Paul Loggan Foundation presented by the Indianapolis Colts.

“World News Tonight with David Muir” builds on the story of Loggan a year after his death, featuring interviews with Loggan’s family, students and athletes, and spotlights the power of ABC News viewers who support the heroes they see in the “America Strong” series.

“GMA3: What You Need To Know” profiles the work of Anthony Talley, whose $1 Thursdays program is sparking kindness in his Georgia community. Talley collects donations of $1 each and then passes the money along to someone in the city who needs it. Last year, he raised nearly $8,000, most of which was given to a man whose house had burned down.

“The View” spotlights what guests of the show, from politicians to celebrities, believe “America Strong” means to them. Co-hosts Whoopi Goldberg, Joy Behar, Sara Haines and Sunny Hostin will reflect on inspiring stories of resiliency displayed during the pandemic.

“Nightline” follows DaKoyoia Billie and Bridget Harrigan, two travel nurses who have put their health and lives on the line to work the front lines of the COVID pandemic. These brave women have spent the last year and a half moving from hot zone to hot zone as the virus ravaged cities across the country. The profiles will showcase the profound impact Billie’s and Harrigan’s sacrifice has on the families they’ve left behind and how travel nurses manage to make this country safer.

ABC News Live correspondent Phil Lipof will be live from Louisiana as the state, hard hit by Hurricane Ida, recovers and shows how it is “America Strong.”

“World News Now” and “America This Morning” will spotlight the work of TikTok influencer Lexy Lately, who has made it her mission to prove that kindness is contagious. Lexy invites her nearly two million followers to donate their spare change to help those struggling in Nashville, Tennessee, including deserving restaurant servers, buskers and rideshare drivers.

ABC News Digital will report on American families who are providing housing to Afghan refugees and helping them start a new life in the U.S. The platform will also feature digital video coverage, including new episodes of “On Location.”

ABC News Radio entertainment correspondent Jason Nathanson will profile the work of a woman in Los Angeles who provides hair washing, styling, braids and more to the homeless on Skid Row after navigating her own personal challenges.

“Start Here,” ABC’s daily news podcast, will highlight volunteers in Texas who are jumping into action and opening their homes to Afghan refugees following the largest American airlift in history.

ABC NewsOne will be providing ABC affiliate stations and partners with reporting by multiplatform reporter Morgan Norwood on how food banks and soup kitchens remained resilient and persistent during the pandemic, featuring interviews with a New Jersey soup kitchen director and the COO of Feeding America.

“20/20” will profile a variety of Americans who can serve as models of unity and moving forward, including a New York mom who turned the pain after her husband’s death into an anthem for finding purpose, and convicted inmates in California who are helping to change lives through a prison service dog-training program. These stories will be distributed across “20/20”’s digital and social platforms throughout September.

On Saturday, Sept. 18, “GMA Weekend” features the resilient Loyola University women’s volleyball team, who are building a winning season living and practicing in Alabama after Hurricane Ida displaced them from New Orleans.

On Sunday, Sept. 19, “This Week with George Stephanopoulos” will take an in-depth look at the racial inequality in schools after a year of lost learning and the investments being made to bring technology into these school districts.